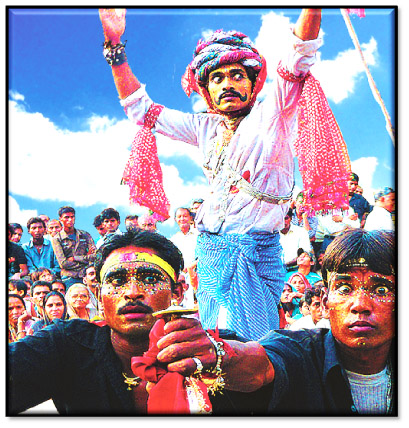 Gavari is a 40-day spiritual rite dedicated to Goddess Gavari (aka Gauri), the Bhil tribe’s main deity and avatar of Shakti, the creative protective spirit animating all humanity and the natural world. It blends myth, dance & worship with biting humor and sage insights. Its essential messages are three-fold: Nature is a sacred realm, women hold the keys, and hierarchies endanger our freedoms, rights and everything that lives. 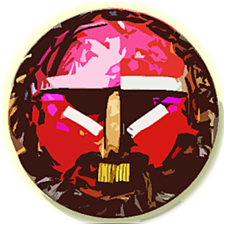 Scale: Every year 20~30 different Bhil communities each dispatch Gavari troupes of 25~50 members who will crisscross Mewar performing more than 600 day-long village ceremonies in all.

Duration & Rigor: A full Gavari cycle lasts 40 days, during which time all players must practice strict austerities to maintain intimate contact with the divine. They forsake not only sex, alcohol and non-veg foods, but also shoes, beds, benches and even eating greens, which might harm insect life. Despite their ascetic rites & grueling performance/pilgrimage schedules, the players seem to burst with vitality until the cycle ends.

Messaging: The average Gavari troupe repertoire may include 10~15 classic tales and new ones are still evolving, but the overarching themes are the sacredness of Nature, the feminine divine, and radical human equality.  These values are reflected in Bhil society where the environment is revered, hierarchy is abhorred and women enjoy greater rights and status than in communities outside. 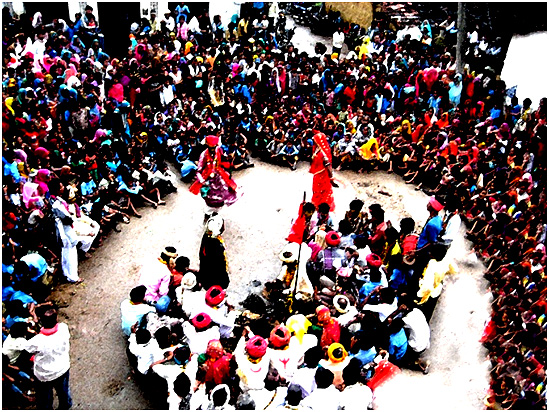 Typical Gavari arena in the villages. The shaman circle in the center
connects the rite to the Goddess and generates its creative power. 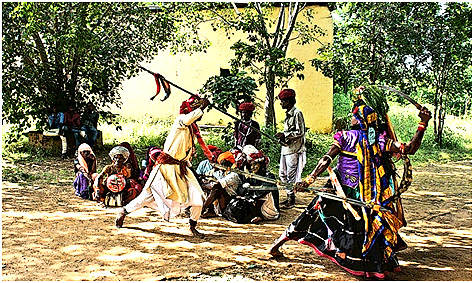 Players warm up before entering the Gavari arena 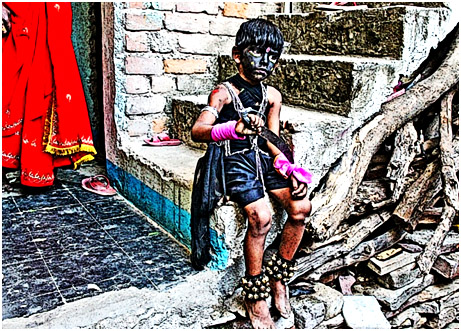 Gavari must be learned by apprenticeship since there are no scripts or classes,
but gov school students today are forbidden to accompany their elders on tour. 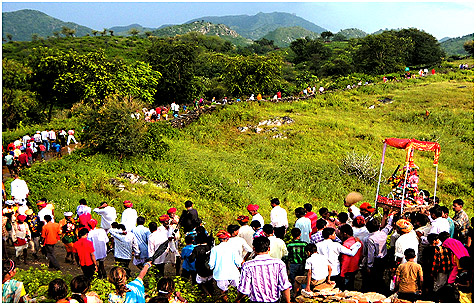 Gavari troupes move like this daily to different villages, but this massive
procession is accompanying the Goddess to the final immersion rite were
Her spirit is returned to the waters to nourish life in the coming year.

(Playlets can be reverent, moralistic or satirical; and themes are drawn from myths, history, tribal lore, and recent events. There are no scripts, all dialog is sung, and most troupes know 10~15 different pieces.)

Depending on the distance, the troupe will set off for the next village that evening or the next morn.

Each year Bhil village shamans called Bhopa try to summon Gavari’s spirit on behalf of the village and entreat Her to permit and participate in their ritual.

Her arrival is signaled by a Bhopa falling into trance and tremors and She speaks through him to accept or refuse their appeal. Common reasons for refusal are said to be village discord, shrine disrepair, poor monsoon rains or bad field conditions, all of which should be attended to before petitioning Her again. If She agrees the Bhopa continues to channel Her as She blesses the fabrics for their costumes and assigns the roles the chief performers will play throughout the 40-day cycle. 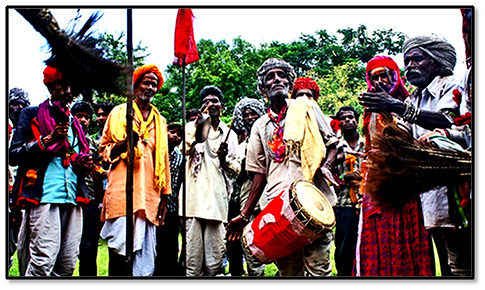 Bhopa shamans calling forth the Goddess

The Goddess must not only sanction the entire ritual, She must also be invoked and present at each daily ceremony. The invocation rite includes planting a trident to mark an altar space, shaman incantations, drum & cymbal music, and circular dancing by the players & villagers to generate a welcoming energy field.  Bhudia, a masked half Siva/half demon figure, cycles around the periphery in the opposite direction as the dancers to hold in the sacred energy and protect it from misuse.

Her arrival is again felt when one or more Bhopas begin trembling as She enters their bodies.  Some of those possessed will beat their backs with heavy chains, not out of penance or piety, they say, but to subdue the rapture they feel before its power sweeps them away.

Once the divine presence is felt and can be trusted to inspire the troupe’s performances, the drama sequences can finally begin. (Players have no scripts or rehearsal sessions and thus must rely on their character’s Muse and memory to guide them through the complex songs, dances & dialogs.)

Some of the many roles that Gavari players bring to life 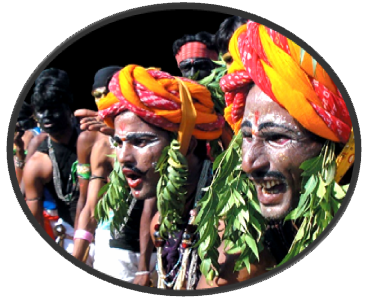 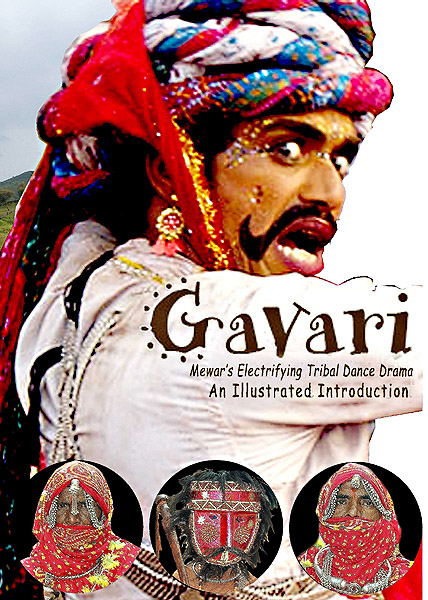 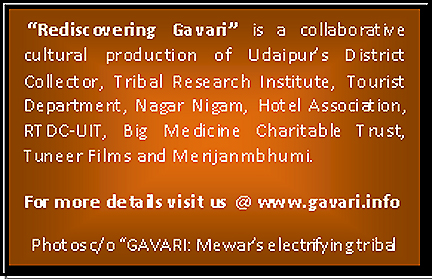